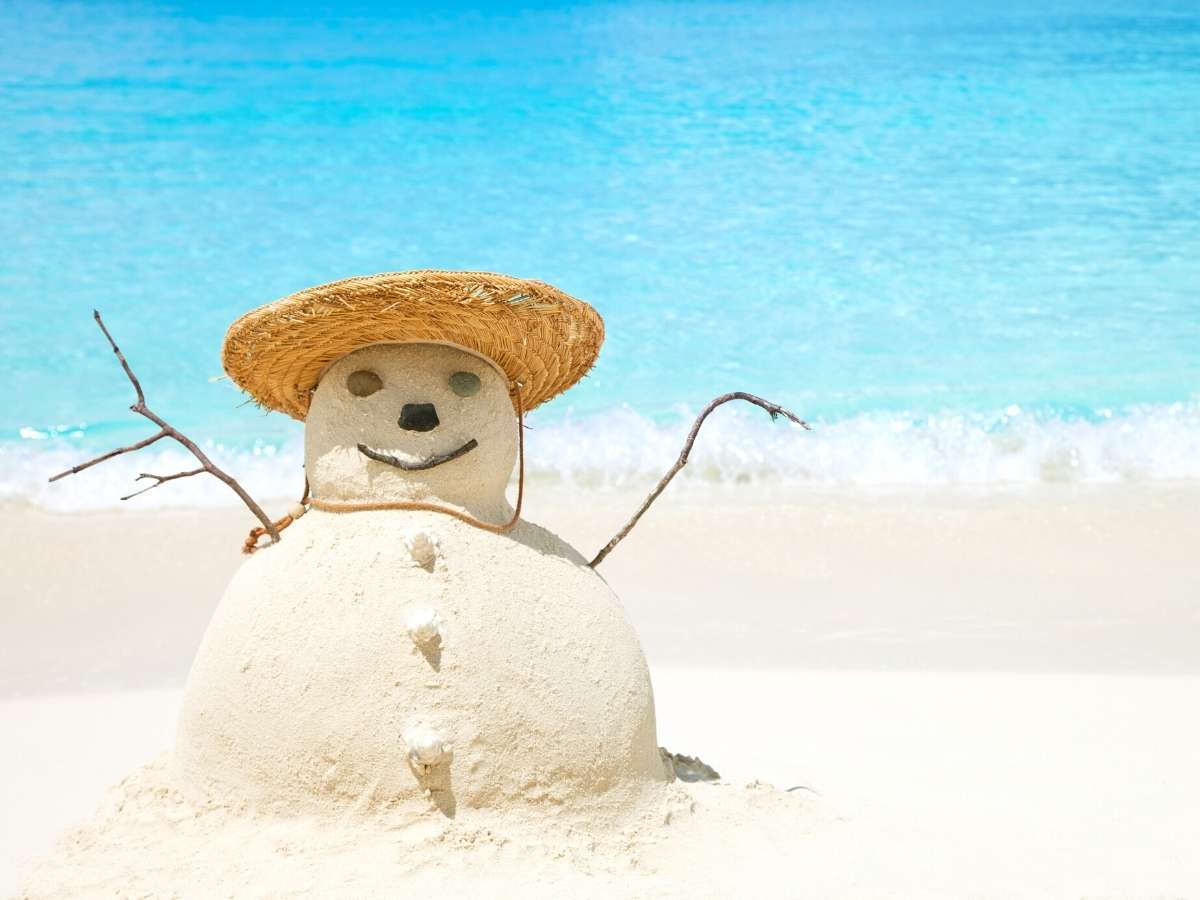 When most people think of Mexico, they think of sandy beaches, palm trees, and hot weather. In fact, these are some of the reasons why I wanted to move to Playa del Carmen, Mexico in the first place!

I’ve always been a warm-weather person and practically jumped at the opportunity to leave the cold Chicago winters behind and move to Playa del Carmen in 2018.

Now that I’ve lived in Mexico as a travel blogger for over 3 years, I’ve had the opportunity to travel around the country and get to experience its diverse landscapes.

What most people don’t know is that Mexico is actually a large country with many different climates. While the vast majority of Mexico does have tropical weather, there are also areas of the country that experience colder temperatures.

But does it snow in Mexico? Read on to find out! In this article, I’m answering 20 of the most frequently asked questions about Mexico snow and weather that might actually surprise you.

FAQs about Snow in Mexico

Before we begin, it’s important to understand Mexico’s geography and just how big the country really is! To give you some perspective, Mexico is almost three times the size of Texas and is made up of 32 different states.

In addition, Mexico has diverse landscapes across the country that range from deserts and beaches to mountains and jungles. This means that Mexico’s climate and weather can vary significantly from one region, city, or state to another.

So when it comes to weather in Mexico, it’s important to keep in mind that there is not always a one-size-fits-all answer. You might need to look more closely at a particular town or region you are interested in visiting for more specific information.

Now that we have a better understanding of Mexico’s size and landscapes, let’s move on to some frequently asked questions about snow in Mexico:

Yes, it does snow in some parts of Mexico. Mexico is a large country with a diverse climate, so while the vast majority of Mexico does experience tropical weather, there are also areas of the country at a high altitude that have colder temperatures.

But while it does snow in Mexico, it’s typically not as heavy snowfall as you might be used to if you live in the United States, Canada, or other colder parts of the world.

2. What part of Mexico gets snow?

Snowfall is more common during the winter months in the mountainous regions of Mexico, such as the northern states of Baja California, Chihuahua, Coahuila, Durango, Nuevo Leon, San Luis Potosi, and Zacatecas.

Central states in Mexico may also receive snowfall but typically only on the highest peaks of the mountain ranges.

3. Where can you see snow in Mexico?

Some of the most popular places to see snow in Mexico are at Copper Canyon National Park in Chihuahua, Mexiquillo Natural Park in Durango, and the pueblo magic (magic town) of Arteaga in Coahuila.

While there’s no guarantee that there will be snow, the best time to visit these places is during the winter months when the chances of snowfall are greater.

4. Which mountains in Mexico are covered in snow?

Mexico’s tallest mountain peaks that are covered in snowfall for most of the year include:

5. How often does it snow in Mexico?

This varies depending on the location, but in general, snow is a fairly rare event in Mexico.

There are some areas of the country that see more frequent snowfall, such as the Sierra Madre mountain range.

However, even in the more mountainous areas, snow is not an everyday occurrence.

6. When does it snow in Mexico?

Mexico snowfall typically occurs between December and February. This is the country’s winter season when temperatures are at their lowest.

However, on the country’s tallest mountains, snowy peaks and glaciers are present all year round.

7. Can you go skiing in Mexico?

While skiing is not a popular sport in Mexico, there are ski resorts in the country. One place you can go skiing in Mexico is at Bosques de Monterreal, which is a small ski resort on the outskirts of Monterrey.

Offering beautiful views of the Sierra Madre Oriental mountains, the Bosques de Monterreal is the country’s highest ski resort with two runs, including one slope for beginners.

With the resort’s unique dry slope, skiing and snowboarding is possible all year round even in the absence of natural snow.

With its small slopes, Bosques de Monterreal is probably not the best place for avid skiers or extreme adventure lovers but nevertheless is one of the only places in the country where the sport is offered.

Plus, the ski center offers many other activities such as ziplines, tubing, and hiking trails.

8. Does it snow in Cancun Mexico?

No, it does not snow in Cancun Mexico. This popular beach destination on Mexico’s Yucatan peninsula experiences warm weather all year round with daytime temperatures averaging about 86 degrees Fahrenheit.

And if you’re wondering if it snows in Playa del Carmen, Tulum, or Cozumel, the answer is also no. All of the beach towns in Mexico’s Riviera Maya have a warm tropical climate all year round and do not see any snowfall.

If you’re visiting the Riviera Maya during the winter months (December-February), the nights can have cooler temperatures so you’ll want to bring a sweater or light jacket.

However, the winter temperatures rarely drop below 60 degrees Fahrenheit and sea temperatures are warm enough to swim in year-round.

9. Does it snow in Cabo San Lucas?

No, it does not snow in Cabo San Lucas in the state of Baja California Sur. While Cabo has more seasonal changes than the Riviera Maya, it is still a warm destination that typically does not have any snowfall.

10. Does it snow in Mexico during Christmas?

If your goal is to have a “White Christmas” in Mexico, you’re more likely to find it in the mountainous northern regions of the country than anywhere else.

That being said, snowfall in these regions during Christmas is still fairly rare and never guaranteed.

No, it does not typically snow in Mexico City. Even though Mexico City is surrounded by mountains, it rarely snows in Mexico’s capital city.

However, it did snow in Mexico City in 1967, which was over 50 years ago, and resulted in up to 2 inches of snow. This was a very rare weather occurrence for Mexico City and was a freak storm that is still talked about to this day!

12. Does Mexico have winter?

Yes, Mexico does have winter. While it’s not as cold as some other places in the world, winter does occur in Mexico from December to February.

During this time, temperatures are lower and there is typically less humidity in the tropical coastal areas.

13. What is the coldest temperature ever recorded in Mexico?

The coldest temperature ever recorded in Mexico was -19.3 degrees Fahrenheit (-28.5 degrees Celsius) in the village of Valerio in the state of Chihuahua.

14. When does winter start in Mexico?

Winter in Mexico typically starts in December and lasts through February. This is when the country experiences its winter weather and lowest temperatures of the year.

15. What’s the hottest month in Mexico?

The hottest month in Mexico is July, with an average high temperature of around 79 degrees Fahrenheit.

August is usually not far behind, with an average temperature of around 77 degrees Fahrenheit.

16. How cold does it get in Mexico in winter?

The overall average high temperature in Mexico during winter is around 40 degrees Fahrenheit.

However, it can get colder in some parts of the country, such as in the Sierra Madre mountain range.

In coastal regions like Riviera Maya, the average high temperature in Mexico during winter is around 81 degrees Fahrenheit.

The best time to visit Mexico generally depends on your interests and what you plan to do while visiting the country.

If you’re looking to escape the cold weather and visit a beach town, then the best time to visit would be during the winter months (December-February), when there is less humidity in the coastal regions and the weather feels more comfortable.

However, this is also the high season and the most crowded time of year so consider visiting on the shoulder months of high season (October/November or March/April) for great weather and fewer crowds.

On the other hand, if you are interested in visiting Mexico’s inland cities, then the best time to visit would be during the Spring (March-May) or Fall (September-November) months when temperatures are milder and more comfortable.

Mexico is a great place to visit in the winter as it will most likely be much warmer than where you are coming from! This makes it a perfect destination for those looking to escape the cold weather.

In addition, central Mexico cities like Guadalajara and Mexico City have milder temperatures during this time and the beaches of Playa del Carmen and Cancun are still warm and sunny.

So if you’re looking for a tropical escape that’s also affordable, Mexico is a great option in winter.

19. Does Mexico have four seasons?

Yes, Mexico does have four seasons although the change in seasons is not as drastic as in some other countries.

Spring (March-May), Summer (June-August), Fall (September-November) and Winter (December-February) are all experienced in Mexico, although the temperatures and weather patterns vary depending on which region of the country you are in.

For example, where I live in Playa del Carmen, the temperature doesn’t change much throughout the year but you can tell a difference in the humidity when it subsides in the winter months.

On the other hand, in inland cities, there are more distinct seasons and you can definitely feel the temperature drop in winter and will need to adjust your wardrobe by wearing pants, jackets, and light winter gear.

20. Is Mexico warm all year round?

No, Mexico does not have warm temperatures all year round. While most of the country experiences a mild or tropical climate, Mexico experiences all four seasons, including winter.

While some areas of the country are warmer than others, there is no place that does not have cooler weather during the winter months.

Conclusion: Does it Snow in Mexico?

I hope this article has answered your questions about whether it snows in Mexico! As you can see, there are some parts of the country that do experience snowfall, but it is not common everywhere.

With the vast size of Mexico, the country has a lot to offer visitors, from its beautiful beaches to its stunning natural wonders to its vibrant cities.

And no matter what time of year you visit, you’re sure to have a great experience in Mexico.