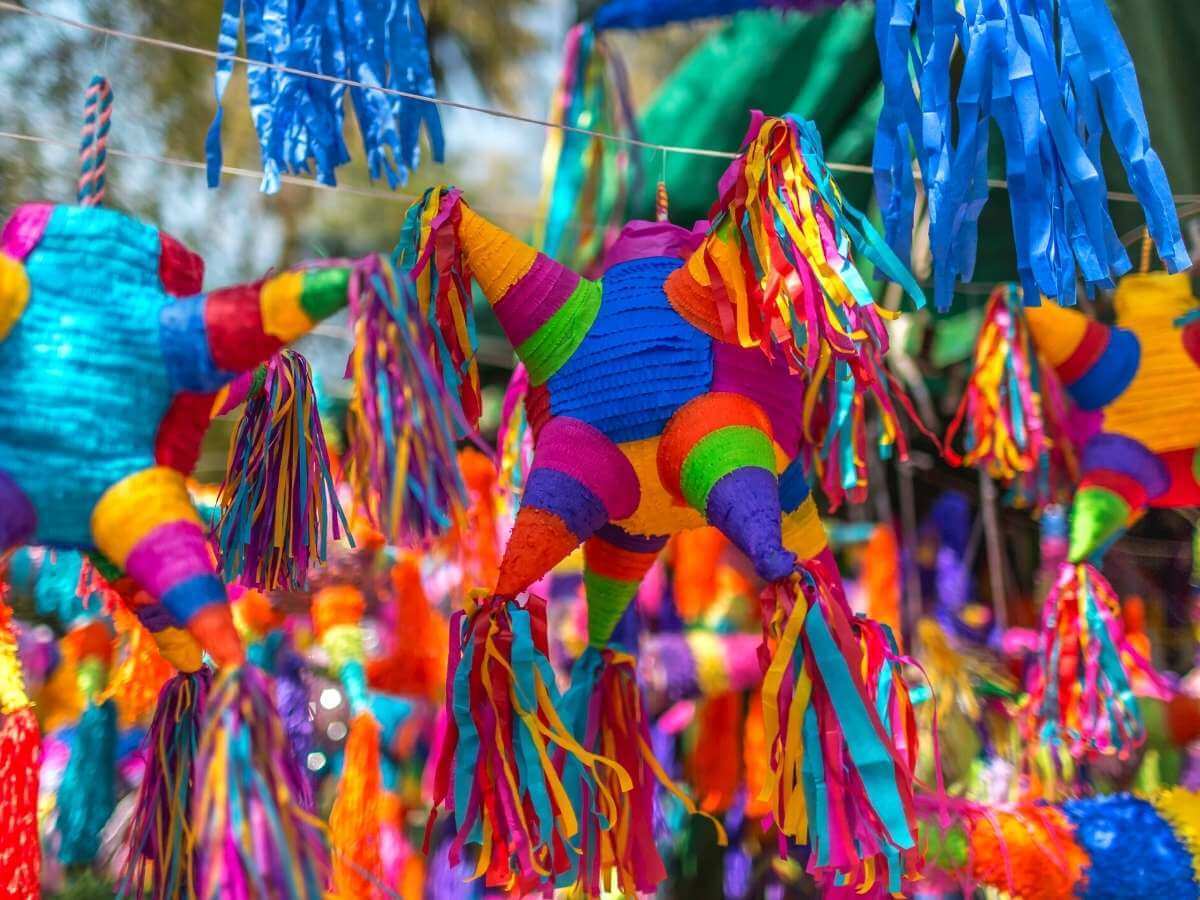 Mexico has a number of unique traditions that make birthday celebrations special. From morning serenades to colorful piñatas, Mexicans celebrate birthdays in a fun and festive way.

When I first moved to Mexico, I worked in a sales office and there was a Mexican birthday celebration pretty much every week!

That was always a fun day in the office and I really got to see and understand what makes Mexican birthdays so unique from other parts of the world.

In this post, I’m sharing some of the most common Mexico birthday traditions to help you understand how Mexicans typically celebrate this special day.

Read on to discover how birthdays are celebrated in Mexico!

How are birthdays celebrated in Mexico?

Here are some of the most popular Mexican traditions for birthdays:

“Las Mañanitas” (Little Mornings) is a morning serenade given to the birthday person at dawn and is probably the most common birthday tradition in Mexico.

This Spanish song describes the beauty of the morning and the singer comes to congratulate the birthday boy or girl.

Friends and family gather outside the birthday person’s house or bedroom to sing it. It can even be sung by a full mariachi band!

Nowadays, the Las Mañanitas Mexican birthday song is sung at any time of day and is usually done so when presenting the birthday cake and blowing out the candles.

Watch the video below to hear what it sounds like!

Here are the Las Mañanitas lyrics in Spanish:

Here are the Las Mañanitas lyrics in English:

Wake up, my dear, wake up,
Look it is already dawn
The birds are already singing
and the moon has set

The morning is coming now,
the sun is giving us its light
Get up in the morning,
look it is already dawn

Tres leches (three milks) cake is popular throughout Latin America and is typically made for birthday celebrations in Mexico.

This rich and delicious dessert is a sponge cake that is soaked in three different types of milk: evaporated milk, condensed milk, and whole milk.

Just like in the United States, the tres leches cake is presented to the birthday person with lit candles and “Las Mañanitas” is sung before blowing out the candles, making a wish, and serving slices of cake.

In Playa del Carmen and the Yucatan peninsula, cakes made with “queso de bola” (edam cheese) are also very popular for birthdays and are often elaborately decorated with icing or fondant.

Mexican birthday cakes are often decorated with themes unique to the birthday person such as sports teams or favorite characters.

Mexican birthday celebrations might also involve “La Mordida” (Little Bite). With this tradition, the birthday boy or girl has their hands tied behind their back and must take the first bite of the birthday cake without using their hands.

Friends and family members shout “Mor-di-da” and typically one person shoves their face into the cake for the first bite. This playful tradition is messy but all in good fun!

This tradition is popular in Mexico but may not always be celebrated by everyone, unless they are up for a good laugh.

Piñatas are another Mexican birthday tradition that can be found at many birthday parties.

Piñatas are paper mache sculptures made from cardboard that are decorated in bright colors and typically filled with candy and small toys.

Blindfolded partygoers take turns hitting the piñata with a stick until it breaks open, leading to a candy-filled frenzy.

Piñatas are commonly used at Mexico birthday parties for children and adults alike, adding an element of excitement and fun to the celebration.

Dating back to Asian origins, piñatas originally had points to symbolize the seven deadly sins with the stick representing the love that destroys the sins.

However, nowadays piñatas come in all shapes, colors, and sizes and often feature popular characters or designs.

Giving money as a birthday gift is less common in Mexico than in the US. Instead, traditional Mexican birthday gifts typically consist of items the birthday person may need or want such as clothing and accessories, electronics, or toys depending on the age.

And aside from the birthday cake, typical birthday desserts might include Mexican rice pudding (arroz con leche) or flan.

It’s also common for friends and family to drink cold beers, tequila, and Coca-Cola. Mexico birthday parties are always a good time and typically involve lots of food, drink, and laughter with loved ones, often into the late night hours.

Mexican birthday parties typically involve traditional Mexican music, such as mariachi, banda, and norteño. Guests often dance to the lively tunes as part of the celebration.

Mariachi bands may even be hired to sing the Las Mañanitas traditional song in the morning for the birthday person, adding to the festive atmosphere.

In addition to the birthday traditions celebrated every year, Mexico also has some age-specific traditions for special hallmark birthdays:

At 3 years old, Mexican families typically celebrate a child’s “Presentación de Tres Años,” or their presentation to the community to celebrate the good health of the child and ask for continued blessings.

This Mexican 3rd birthday tradition commemorates the presentation of the Virgin Mary at 3 years old and is typically celebrated with a mass where the priest will bless the child, who is dressed up in nice clothes.

After the mass, a large family gathering takes place and the child is given gifts from friends, family, and godparents.

In Mexico, a girl’s 15th birthday is celebrated with a grand party called “La Quinceañera.”

Also known as a “coming of age” celebration, these festivities involve the girl wearing a beautiful dress, usually pink or white, and being presented to society as a woman.

A Quinceañera usually begins with a mass, where the girl sits at the altar and pays homage to the Virgin Mary with a special bouquet. The mass is then followed by a large party with friends and the entire family.

Traditionally, the girl will also have a special dance with her father or another important male figure in her life. This Mexico birthday tradition is often compared to a sweet sixteen party or debutante ball in the United States.

🤔 Do boys have a Quinceañera? Boys traditionally do not celebrate a Quinceañera in Mexico, however in recent years, a Quinceañero (notice the “o” on the end) has become more popular for boys to mark their journey into adulthood.

Here are the answers to some of the most frequently asked questions about birthdays in Mexico:

Why do Mexicans celebrate 3rd birthday?

Mexico celebrates a child’s “Presentación de Tres Años” to commemorate the good health of the child and ask for continued blessings.

The Spanish word for birthday is “cumpleaños”.

How do you say “Happy Birthday” in Spanish?

“Feliz cumpleaños” is the way to say “Happy Birthday” in Spanish.

Why do Mexicans smash cake in face?

Why is 15 an important age in Mexico?

In Mexico, a girl’s 15th birthday is celebrated with a grand party called “La Quinceañera,” marking her transition into womanhood. This special event is considered an important milestone in Mexican culture.

I hope this article has given you a glimpse into some of the unique and vibrant Mexican birthday party traditions.

If you ever have the opportunity to attend a traditional Mexican birthday party, be sure to bring a gift, an appetite, and your dancing shoes–it’s sure to be a special occasion you won’t forget!