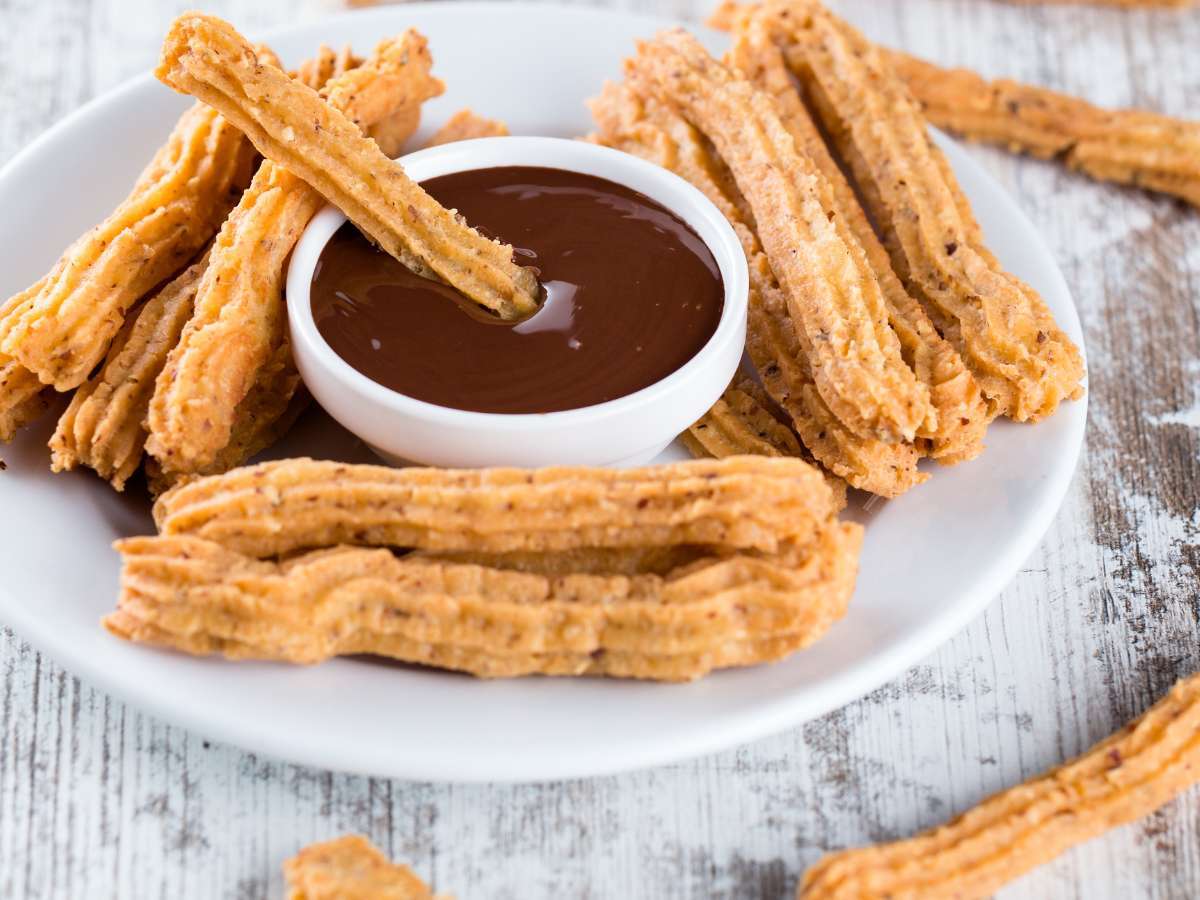 Wondering whether churros are originally from Mexico? You’ve come to the right place!

Churros are a popular fried dessert that are enjoyed as both a sweet treat and as a street food in many cities throughout Mexico.

I’m a travel blogger that lives in Mexico and they are one of my favorite desserts to enjoy from street food vendors or even on the dessert menu at a restaurant. They are just too tasty to resist!

But are churros from Mexico? You’re about to find out! In this post, I’ll explain more about the origins of Mexican churros, where you can find them, and the most popular types to try in Mexico.

Read on to learn more about churros, and whether they are truly a Mexican treat!

Are churros from Mexico?

No, churros are not originally from Mexico, but are believed to have originated in Spain and Portugal and made their way to Mexico with Spanish immigrants.

Churros are most well-known as a Spanish dessert, but nowadays are just as popular in Mexico and can be found in cities all over the country.

They are typically served with a side of hot chocolate or dulce de leche dipping sauce and are enjoyed by both locals and tourists in Mexico.

Churros are a classic Spanish dessert that are made by frying strips of dough and then coating them in sugar or cinnamon.

Typically served alongside thick hot chocolate, they are a delicious and popular treat throughout Spain, Mexico, and Latin America, where they are enjoyed as both a sweet dessert and as a street food.

How are churros made?

Churros are traditionally made by preparing a small amount of dough made from flour, water, and salt.

Then a piping bag or pastry bag with a star tip is used to drop the dough into hot oil.

Churros are then fried until crisp and golden brown, before being coated in a cinnamon sugar mixture.

👩‍🍳 Churro recipes are fairly simple, and are a fun dessert to make at home as well!

Where are churros from originally?

Churros are believed to have originated in Spain and Portugal but their exact origins remain unclear.

Some believe that churro-like pastries known as “youtiao” were first brought to Portugal from China and then introduced to Spain.

Others believe that churros were invented by Spanish shepherds who would fry strips of dough over campfires in the mountains.

Regardless, the dish was then brought to Mexico and other Latin American countries by Spanish immigrants, where it quickly became popular and has remained a beloved dessert and snack to this day.

What is the difference between Mexican churros and Spanish churros?

Authentic Mexican churros and Spanish churros are very similar and both are made of fried dough.

The difference is that a Spanish churro is usually coated in just sugar and served with hot dipping chocolate.

Mexican churros are coated in both cinnamon and sugar and may be eaten plain or accompanied by chocolate, caramel, or other dipping sauces.

Types of Churros in Mexico

There are a few different types of churros that are popular in Mexico, including:

Where can you eat churros in Mexico?

When visiting Mexico, there are many different places where you can enjoy churros. Some popular spots include street vendors, beach vendors, restaurants, and specialty churro shops.

The easiest place to find churros in Mexico is from street food vendors. These vendors are often found in the main tourist areas or the main town square (“zócalo”) in most major cities in Mexico.

You’ll typically be able to order classic churros or churros rellenos, alongside other Mexican treats like crepes and marquesitas.

If you’re visiting a beach destination in Mexico like Playa del Carmen or Cancun, you’ll typically see vendors walking up and down the beach selling churros.

These typically aren’t as fresh as those you would find at a restaurant but are still a delicious treat for when you’re looking for something sweet.

In addition to street food vendors, churros are also commonly served at restaurants across the country, as part of the dessert menu and commonly paired with ice cream.

You can also order homemade Mexican churros alongside other classic Mexican desserts like flan or tres leches cake, or pair them with coffee or hot chocolate.

Because churros are such a popular dessert in Mexico, there are also dedicated churro restaurants (known as a “churrería”) that specialize in making churros in a variety of sizes and unique flavors.

For example, in Playa del Carmen there is a novelty churro shop called Suerte de Churro, which is a small storefront that sells a variety of churros in different sizes and flavors, and even paired with milk shakes.

And in Mexico City, you can’t miss the iconic Churrería El Moro, which is the oldest churro restaurant in Mexico’s capital city, and now has several locations throughout the city.

Whether you are looking for a simple sugar-coated treat or are feeling adventurous and want to try one of their unique flavor combinations or dipping sauces, these specialty shops have something to satisfy every sweet tooth.

Here are the answers to some of the most frequently asked questions about churros from Mexico:

Are churros Mexican or Spanish?

Churros are originally from Spain, but they are now a popular dessert and street food in Mexico.

What are Mexican churros made of?

The traditional churros in Mexico are made using a simple recipe of flour, water, and salt. They are typically fried in oil until they are golden brown on the outside and then coated with both cinnamon and sugar.

What are traditional Mexican desserts?

Some of the most popular traditional Mexican desserts include tres leches cake, flan, churros, rice pudding, and marquesitas.

How do you pronounce churros?

The correct pronunciation of “churros” is “chu-rros”, with a rolled r sound.

Are churros a Mexican snack?

Yes, churros are a popular Mexican snack that are commonly sold by street vendors in many cities throughout Mexico.

How much are churros in Mexico?

Churros from street food vendors in Mexico are fairly inexpensive and may only cost around $50 pesos (~$2 USD) per serving.

However, specialty churro shops and restaurants will charge more for a dessert plate along with ice cream, hot chocolate, or other dipping sauces.

Final Thoughts: Are Churros from Mexico?

So, are churros Mexican? While churros are not native to Mexico, they are certainly enjoyed by many Mexicans as a delicious dessert!

While the Mexican churros history is a bit unclear, it is believed that churros originally came from Spain and Portugal and then brought over to Mexico by immigrants.

Nowadays, they are a popular dessert and street food in Mexico, where you can find them easily from street vendors, restaurants, and specialty churro shops.

If you are visiting Mexico soon, be sure to try this traditional dessert for yourself for a bit of culture and a sweet treat!

My personal favorite are the Mexican churros with filling (“churros rellenos”) that are stuffed with caramel or chocolate sauce.

And even if you’re not visiting Mexico, you can still try an authentic Mexican churros recipe for a chance to taste some homemade churros.

Just don’t forget to pair it with some hot chocolate or ice cream for even more deliciousness! You won’t regret it!