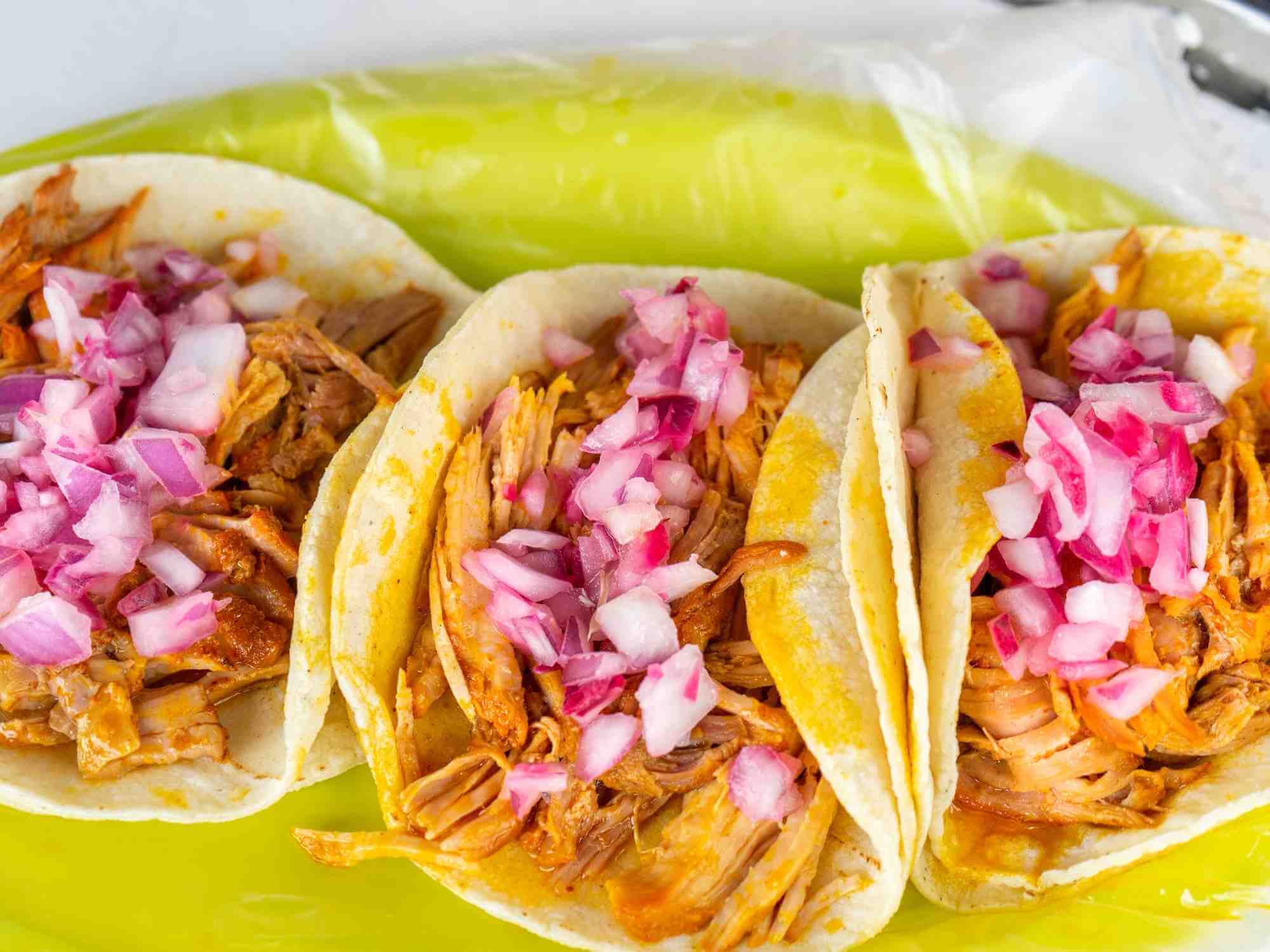 Even though Playa del Carmen is primarily a tourist destination, you can still find a variety of traditional Mexican street foods, as well as regional specialties.

However, one of the best ways to really experience Mexican food and local specialties is to try out some of the traditional street food.

In Playa del Carmen, you’ll find many different types of street foods that are popular in other parts of Mexico, as well as regional specialties that are just unique to the Yucatan peninsula.

The cool thing about Playa del Carmen is that the majority of locals have moved there from other parts of Mexico, thus bringing with them traditional foods and dishes from other states and regions.

The street food culture in Playa del Carmen is really an eclectic blend of many different cuisines.

All of the street foods in Playa del Carmen are really inexpensive and will generally cost less than a few dollars.

This makes it a great way to experience the Playa del Carmen local food culture without breaking the bank.

And if you don’t end up liking something, you won’t have wasted much money. When trying new street foods, you’ll want to have cash on hand and it’s easiest to pay in pesos.

Where to Find Street Food in Playa del Carmen

While visiting Playa del Carmen, you’ll more than likely just happen upon street food vendors while walking around and exploring the town.

But if you really don’t want to miss out on any of the best street food in Playa del Carmen, I would recommend booking a fun street food crawl led by a local tour guide.

In addition, here are the most common places to get your hands on some of the best street food.

The easiest place to find street food in Playa del Carmen is on or near Fifth Avenue, which is a pedestrian-only street that spans for more than 20 blocks.

Fifth Avenue (“La Quinta Avenida” in Spanish) is the major tourist hub where you’ll find the majority of restaurants, entertainment, and shopping in Playa del Carmen.

Because this area attracts so many tourists, you’ll almost always find street food vendors and carts near Fifth Avenue.

While walking down Fifth Avenue, be on the lookout for rolling carts and bicycle trolleys, and listen for street vendors as they will commonly shout out what food items they are selling.

Another popular spot for street food vendors is on or right near the beach. You’ll see many vendors walking up and down the beaches in Playa del Carmen usually with food containers on their shoulders.

The most common foods sold at the beaches are kibis, empanadas, churros, coconuts, and mangos.

There seems to always be some kind of festival or special event happening in Playa del Carmen.

At these festivals and celebrations, there will always be rows of food stalls selling street food specialties from all over Mexico.

There are a couple of food truck parks and markets in Playa del Carmen that are more popular among the locals and a great place to try some street food.

One food truck park is located downtown on the corner of 2nd Avenue and 15th Street.

Another open air food market located further away from downtown is called the Public Market, which has a variety of different restaurants and cuisines.

As I mentioned, I would definitely recommend a Playa del Carmen food tour if you really don’t want to miss out on any of the best street foods.

These tours are a fun way to experience the best local dishes, and give you the opportunity to meet new people in a relaxed environment.

On these Playa del Carmen food tours, you’ll get to try many different local specialties, all hand picked by a local tour guide.

Most are walking tours, which is a great way to explore the downtown area.

Below are the most common street foods that can be found in Playa del Carmen that are savory, sweet, and healthy.

Elote, or Mexican street corn, is one of the most common street foods sold in Playa del Carmen.

It is essentially corn on the cob that is grilled, then covered in a mayo cream sauce, and topped with cotija cheese, tajin (chile/lime seasoning), and cilantro.

It generally comes on a stick, or you can also request it shaved down into a cup, making it easier to eat with a fork.

Cochinita pibil is a traditional slow roasted pork dish that originated in the Yucatan peninsula of Mexico.

It is most commonly served on tacos or tortas and topped with pickled onions and salsa.

It’s not spicy but has a slightly sweeter flavor from being marinated and slow roasted in a pib, which is Mayan oven consisting of a hole in the ground lined with hot stones.

In Playa del Carmen, you can find cochinita pibil at La Cochi Loka, which is a small window front restaurant on 10th Street, right across the street from La Embajada bar.

Its proximity to many of the bars in Playa del Carmen makes it a popular spot for late night tacos.

Like anywhere in Mexico, tacos are a street food staple that can be found all over town.

Traditional Mexican tacos consist of a corn tortilla topped with meat, onion, and cilantro, and topped with salsa and lime.

My favorite type of Mexican tacos is al pastor, which is rotisserie style pork topped with pineapple.

In Playa del Carmen, street tacos can be found at festivals and special events, as well as at food trucks outside many of the grocery stores.

I personally like the tacos from these taco joints in Playa del Carmen but street tacos are also quick, tasty, and inexpensive.

Travelista Tip: Similar to tacos, another common street food is called the “Gringa”, which is a large flour tortilla filled with al pastor meat, melted cheese, and pineapple.

They generally come on a bread roll and the meat fillings are similar to those you might find on tacos like pork, chicken, or beef. They are super tasty and filling!

In Playa del Carmen, you can usually find tortas at the same places where they are selling tacos.

Tamales are a traditional dish found in many parts of Latin America that consists of a corn masa dough mixture that is steamed in a corn husk or banana leaf, which is removed before eating.

There are many different types of tamales, where the masa is mixed with meats, cheese, or beans.

In Playa del Carmen, you can find tamales at many of the Mexican restaurants, as well as outside of grocery and convenience stores.

Be on the lookout for a large silver cooker, and they will most likely be selling tamales.

Originating from Argentina, empanadas aren’t traditionally Mexican but they are still a popular street food found in Playa del Carmen.

In fact, Playa del Carmen actually has a huge population of Argentinian people so you can find some really tasty and authentic empanadas.

Empanadas are typically a baked or fried turnover filled with a variety of toppings like meat, cheese, and vegetables.

There are a few Playa del Carmen restaurants that serve empanadas (my favorite one is El Che y el Güey) but I have most commonly seen them being sold by vendors on the beach.

Kibis are another traditional Yucatan food consisting of a fried dough filled with meats and cheeses and served with pickled onions. They are usually a darker brown color and football shaped.

In Playa del Carmen, kibis are most commonly sold by vendors on the beach and it sounds like they are saying “kiwis”.

Like in many parts of Mexico, grasshoppers (“chapulines” in Spanish) are another common street food and snack.

You’ll usually see vendors on 5th Avenue with large plastic containers filled with grasshoppers that have been fried and seasoned with pepper, garlic, and lemon.

I know it sounds disgusting but hear me out. I definitely don’t like grasshoppers to eat on their own, but I have eaten grasshoppers on tacos and it actually wasn’t terrible.

They are even considered a delicacy in some Mexican restaurants. And when mixed with other taco fillings, they are pleasantly disguised. I dare you to give it a try!

Marquesitas are rolled wafers that are extremely popular in Playa del Carmen and are personally one of my favorite street foods.

You’ll see marquesitas carts on many street corners around 5th Avenue where the vendors will make the wafers on a hot plate right in front of you.

While ordering, you can choose your fillings that generally consist of bananas, jams, caramel, nutella, cream cheese, and chocolate sauce. Marquesitas can be very filling but are definitely a tasty treat.

Churros are a tasty dessert found in Spain, Mexico, and other parts of Latin America. They typically consist of fried dough that is rolled in cinnamon and sugar, and usually accompanied by dipping sauces such as chocolate or caramel.

Churros are probably one of my favorite desserts and I personally love the thicker style churros (“churros rellenos” in Spanish) that are filled with caramel sauce.

In Playa del Carmen, churros can be found on the beach, as well as at various window stalls along Fifth Avenue.

Crepes are not traditionally Mexican, but are still a popular street food in Playa del Carmen.

Consisting of a thin pancake, they are usually filled with sweet toppings such as chocolate, caramel, and fruit fillings. They are similar to marquesitas but less crispy.

One thing I love about Playa del Carmen is that there are a ton of fresh fruit stands selling tropical fruits such as pineapple, mangos, and dragonfruit.

These are great spots to try some exotic fruits, juices, and flavors that are more native to Mexico.

My favorite fruit stand is right in front of the Soriana grocery store on 30th Avenue and 38th Street (pictured below).

They have the best fresh squeezed juices, as well as jumbo fruit cups and smoothies which can be purchased for less than a couple of dollars.

This usually consists of a plate with sliced cucumbers topped with lime juice and tajin (chili/lime seasoning).

This cucumber snack is typically sold from food carts and trolleys around Playa del Carmen.

Fresh coconuts (“cocos” in Spanish) are a refreshing street food that is most commonly sold on or near the beach.

The traditional ones are not filled with a frozen cocktail, but rather fresh coconut water and garnished with a straw.

Mangos are another healthy street food usually sold on or near the beach alongside the fresh coconuts. They generally come freshly sliced in a cup to be eaten with a fork.

It’s also common for the mango slices to be topped with spices such as tajin, but this is optional.

Did you like this best street food Playa del Carmen guide? Pin it for later!