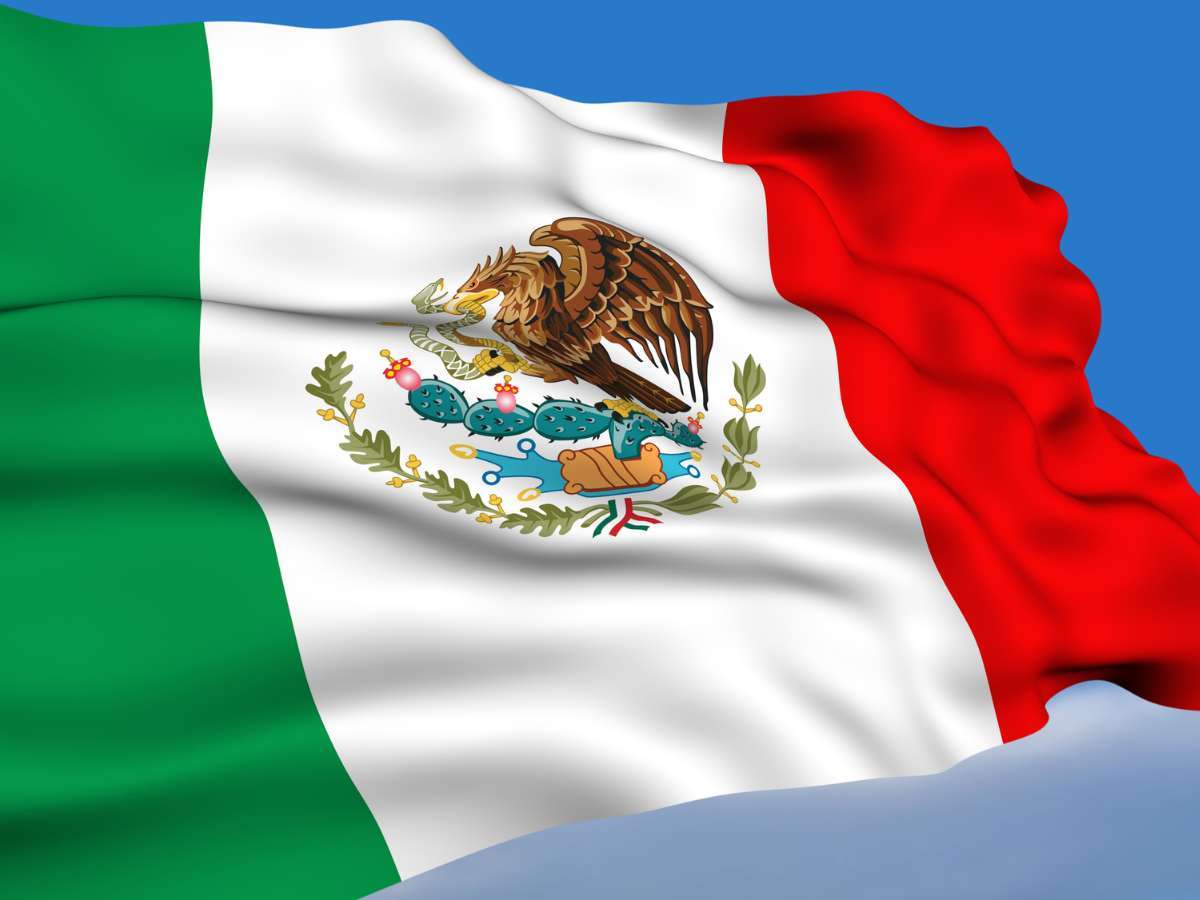 Wondering what the national animal of Mexico is? Look no further!

Mexico is a vibrant and diverse country, known for its rich culture, beautiful landscapes, and abundant natural resources. As such, it has many national symbols that represent different aspects of the country’s identity and history.

How do I know? I’m a blogger that lives in Mexico and I’ve seen many of these national animals and symbols in day-to-day life.

So if you’re interested in learning more about Mexico, or simply fascinated by national animals, then read on to discover the national animals of this fascinating country!

What is the national animal of Mexico?

The national animal of Mexico is the Golden Eagle (Aquila chrysaetos), a majestic bird revered by many for its strength and beauty.

With a wingspan of over 8 feet and a powerful beak, the Golden Eagle is capable of diving for prey at speeds of up to 150 miles per hour.

As the official animal of Mexico, the Golden Eagle is a truly impressive creature that serves as a symbol of strength and national pride for the country.

🇺🇸 The Golden Eagle is not be confused with the Bald Eagle, a national symbol of the United States, which is often mistaken for its Mexican counterpart.

Other National Animals of Mexico

Alongside the golden eagle as Mexico’s main national animal, Mexico also has many other animals that represent different parts of the country’s history and culture.

The national mammal of Mexico is the jaguar, a large and powerful cat that can be found in jungle environments throughout the country.

The largest jaguar population in Mexico can be found in the Yucatan Peninsula on Mexico’s eastern coast. Where I live in Riviera Maya, you’ll even see “Jaguar Crossing” signs on the main highway.

Jaguars are the third largest cat in the world–only after tigers and lions–and are the largest cats in the Americas.

These powerful spotted wild animals can reach speeds of up to 50 miles per hour, giving them the ability to travel long distances and hunt down even the fastest prey.

The jaguar was also an important symbol for the Mayans and it was a popular belief that at night the sun transformed into a jaguar.

The animal was also associated with warriors and hunters, making it a national symbol of strength and power for Mayan rulers.

Ancient relics and carvings depicting this national mammal can be seen throughout archeological sites in Mexico today such as Chichen Itza.

The national marine mammal of Mexico is the Vaquita, a small porpoise that can only be found in the shallow waters of the Sea of Cortez.

The Vaquita has been declared a critically endangered species and conservation efforts are being put into place to protect this national marine mammal from extinction.

Vaquitas have dark large eyes and black stripes around the eyes and mouth, and with a triangle-shaped dorsal fin, they are often mistaken for dolphins.

The national dog of Mexico is the Xoloitzcuintli (pronounced “Show-low-itz-queent-ly”), a breed of hairless dog that has been around for thousands of years.

Xoloizcuintlis were once believed to be sacred animals in Aztec mythology and many Xolos were sacrificed as offerings to their gods.

However, today they are beloved domestic animals and national pets known for their loyal and gentle temperaments.

In Mexico, you’ll find Xolo dogs in all shapes and sizes, but typically they are small or mid-sized canines with thin long legs, pointy ears, and a long snout.

As the national dog of Mexico, this breed is naturally attuned to the country’s hot climate and has become a national symbol of Mexican culture.

🎬 The Xolo dog is the type of dog depicted by Dante in the Disney-Pixar “Coco” movie.

The national feline of Mexico is the Ocelot (Leopardus pardalis), a medium-sized wild cat with spotted markings that typically weigh around 30 lbs.

Ocelots are found in habitats ranging from tropical rainforests to brushlands, and can be found in arid climates in northern Mexico.

They are known for being predators, mainly eating small mammals and reptiles.

The national arthropod of Mexico is the Chapulin, a common grasshopper that can be found throughout the country.

These small green insects are known for their strong wings and jumping abilities, as well as their ability to survive in extreme temperatures.

In recent years, chapulines are a popular national snack that can be found at street vendors and food markets throughout the country.

So if you’re visiting Mexico, be sure to try some of these tasty national insects. I’ve tried them on tacos and they are actually not too bad!

The national amphibian of Mexico is the Axolotl (pronounced “Ack-suh-lah-tuhl”), a small salamander that is found in lakes in Mexico, including the canals at Xochimilco near Mexico City.

Axolotls (Ambystoma mexicanum) use their distinctive-looking gills to get oxygen from water, and are known for their black eyes with gold irises.

They can grow to be up to 25 cm long and have a remarkable ability to regenerate tissue and vertebrae.

Despite being a national symbol of Mexico, the axolotl is now on the verge of extinction due to floods and habitat loss.

Conservation efforts by the Mexican government are therefore underway to protect this national amphibian from extinction.

Other National Symbols of Mexico

Aside from animals, there are many other national symbols that represent Mexico including flowers, trees, and fruit.

The national flower of Mexico is the Dahlia, a stunningly beautiful flower with bright petals, bold colors, and tube-like stems.

This national flower is native to Mexico, but can also be found in countries throughout North America, Central America, and South America. The dahlia was first grown by the Aztecs, who used them for medicinal purposes.

Today, the dahlia is widely cultivated in Mexico and throughout the world, with national competitions held each year to celebrate the beauty of this national flower.

The national tree of Mexico is the Montezuma Bald Cypress, an evergreen tree native to central Mexico.

This national tree is known for its tall stature and beautiful weeping branches that create an impressive canopy when it grows in groups.

One of the most notable Montezuma Bald Cypress trees can be found in Oaxaca, Mexico and is known as the “Árbol de Tule” (Tree of Tule).

With a trunk diameter of around 40 feet, the Tree of Tule is considered to be the widest tree in the world and at least 2,000 years old.

The national fruit of Mexico is the avocado, a popular fruit that is native to Central and South America.

Avocado might not immediately come to mind as a fruit, but it is indeed a fruit, scientifically known as “Persea americana”.

This national fruit has a unique green skin and creamy texture that makes it an extremely popular ingredient in many Mexican dishes like guacamole.

It’s also packed with healthy fats and important nutrients such as vitamin B and vitamin E.

If you’re visiting Mexico, be sure to try some delicious avocados to experience this national fruit for yourself!

What are the symbols on the Mexican flag?

One of the most iconic national symbols of Mexico is its flag, which features a vibrant green, white, and red design with an eagle perched atop a prickly pear cactus.

The eagle is holding a snake in its talons, which represents the Aztec legend of the founding of Tenochtitlan, the site of modern-day Mexico City.

According to the legend, the Aztecs were told by the god of war to found their city where they saw an eagle perched on top of a cactus. The snake was later added to the story by the Spaniards, after a misinterpretation of Aztec texts.

These symbols are now on the Mexican flag and represent a triumph of good over evil.

Other national symbols on the Mexican flag include laurel leaves that surround the national coat of arms at its center representing victory and honor.

The green, white, and red colors on the flag also have special significance. The green represents hope, while the white symbolizes national unity. The red signifies the sacrifice of the country’s national heroes.

Here are the answers to some of the most frequently asked questions about the national animal for Mexico:

What is Mexico’s national mammal?

Mexico’s national mammal is the jaguar, a large cat native to much of Central and South America.

Jaguars are famous for their strength, grace, and fierce hunting abilities, making them an important national symbol that represents national pride and national strength.

Does Mexico have a national bird?

Yes, the national bird of Mexico is the Crested Caracara, which is known as the Mexican Eagle. These birds are medium-sized and look like tropical falcons that are black and white in color with long legs.

Contrary to popular belief, the Mexico national bird is actually different than the Golden Eagle, which is depicted on the Mexican flag.

What is the Aztec dog?

The national dog of Mexico is the Xoloitzcuintli, an ancient breed whose name means “dog of the god Xolotl.”

This national dog is typically hairless and has a number of unique physical features that are particular to its national heritage.

I hope this guide to Mexican national animals has been helpful for anyone interested in learning more about these iconic national symbols.

But aside from the Golden Eagle, the country is also home to other national animals, foods, flowers, trees, fruits, and other national symbols that are unique to Mexico and its rich national heritage.

Whether you’re visiting Mexico soon or simply someone who loves Mexican culture, the nation’s animals are interesting to learn about and play an important role in Mexican culture.

Be on the lookout for these animals and symbols during your next travels to Mexico!

These are the Mexico travel resources I use and recommend:

🏨 Hotels: I always find the best deals for Mexico hotels and resorts on Booking.com. If you prefer a vacation rental, check VRBO as they are often cheaper than AirBnB’s added fees!

✈️ Flights: I recommend using Skyscanner for the best Mexico flight deals. Be sure to sign up for their price alerts for your preferred travel dates.

🚗 Rental Cars: I like to use Discover Cars because you can compare multiple car rental companies and see detailed ratings for overall value, ease of pick-up, efficiency of agents, car condition, and overall time spent.

🤿 Tours & Activities: I always use Viator or GetYourGuide for booking tours and activities in Mexico. You can cancel up to 24 hours before the tour for a full refund, plus they have excellent customer service if you were to have any issues.

🚨 Travel Insurance: After my Dad broke his hand in a taxi accident in Playa del Carmen, I always recommend buying travel insurance before your trip for added peace of mind! I recommend Travel Insurance Master for short trips or Safety Wing for digital nomads.